What was your favorite thing to do when you were little?

When I was a little girl, I used to spend long, lazy days sloshing through puddles, climbing trees, and looking at the stars. And I loved to READ! My favorite spot was a low-hanging tree branch in my back yard. I used to love tumbling headlong into the plot of a great book, all curled up in that tree. ​Once, after I finished reading Peter Pan, I tried to leap off that branch and fly! (It didn't work -- not enough fairy dust.)

What inspired you to write children's books?

The principal at my school believed we should get to meet our favorite authors—mine were Elizabeth Borton de Treviño (I, Juan de Pareja), Zilpha Keatley Snyder (The Witches of Worm), and Marguerite Henry (Misty of Chincoteague). Meeting them was AMAZING! I still have my autographed copies of their award-winning books.
​ 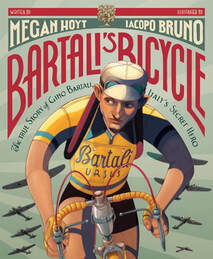 Tell us about your latest picture book, Bartali's Bicycle?

When I first heard about Gino Bartali’s success as a Tour de France winner just before World War II began, I thought, oh, that’s nice. There had been other champions before him and there would be more after him. Then when he died in 2000, suddenly people began coming forward to share their stories. He had secretly saved more than 800 Jewish Italians from certain death during the war, and he never told anyone! When the story broke in Italy, elderly women ran out into the streets weeping. It was unbelievable. I knew I had to tell the story to American children, too. May we never forget. And during this particular time, at this moment when we are facing down racism and staring anti-semitism in the eye and saying no more, I hope our book will inspire children to become adults of integrity and courage and generosity. I know in time we humans will learn the hard lessons we need to learn. And Gino Bartali’s story will, I hope, help us get there just a wee bit sooner!
​ 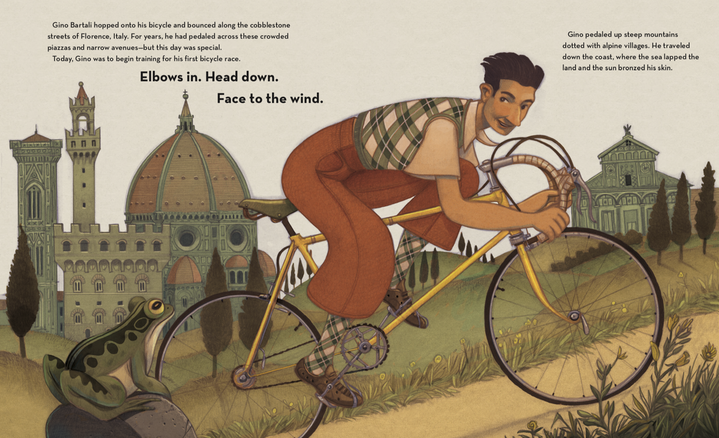 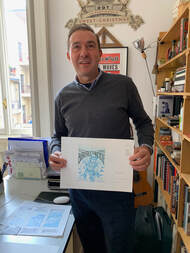 ​I understand you went to Italy and had a chance to meet with the illustrator Iacopo Bruno!
​
Yes! When I went to Italy, I asked if he wanted to meet since he lives in Milan. Just name the place, I said. And he chose (of course) a bicycle cafe! There were bicycles hanging all over the restaurant, and they sold racing gear, too. It was the perfect spot! Thank goodness he brought his wife Francesca because he does not speak a lot of English, and I don’t speak much Italian. We went to his studio after lunch, and I got to see sketches from his latest work in progress and final sketches of our beautiful book! And he gave me a gift! I didn’t think to get him a gift. Is that an Italian thing or is he just the nicest illustrator ever? And so talented—he created art for the book that makes you feel like you fell into a 1940s movie or something. It’s so retro and cool! 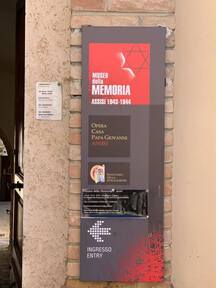 ​      My husband and I also went to the Gino Bartali Museum in Florence and the Museum of Memory in Assisi. Everywhere we traveled, people wanted to talk to us about how wonderful Gino Bartali was. They told us the same stories over and over, but we never got tired of listening to his fans talk about him. And I interviewed his granddaughter, Lisa Bartali, who wrote a note for the back of the book. We messaged back and forth on Facebook, and she shared screen shots of pages in a book written about and by her grandfather in Italian. I typed each page, first in Italian, then put them through Google Translate to see what in the world I was typing. It was wonderful to find Italian sources to verify the secret work he did to rescue Jewish people from the clutches of Mussolini and Hitler during the war.
What inspired you to write your first book, Hildegard's Gift?

My mom and dad were both symphony musicians. Mom played violin, and Dad played viola. (Do you know the difference between those two instruments? The violin is smaller and plays higher notes than the viola.)

My parents used to host big parties. Cellists, trombone players, violinists, and conductors all gathered to eat piles of lasagna and fill our house with loud conversations about music and composers. I used to sit on the stairs and listen. Sometimes I went to work with them. While they were rehearsing with the rest of the symphony musicians, I used to wander backstage at the Music Hall or listen to the resounding voices of opera singers as they shook the rafters. I sure LOVED music! Still do! When I grew up, I learned about the people who wrote my favorite music. Their lives were very different from mine because they lived so long ago. I wanted to tell children what I learned about these composers. 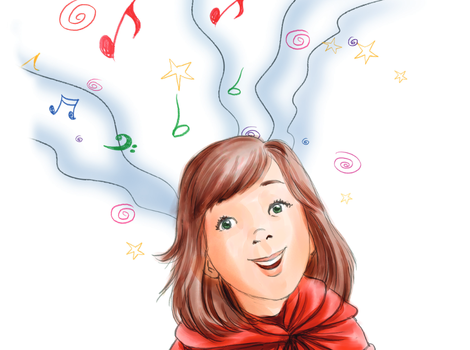 Illustration by David Hill
Tell us about your first book?
Who was Hildegard?
​
Combining my love for both books AND music, I created a book about a Medieval composer named Hildegard of Bingen. (Bingen is a city in Germany.) My book is called Hildegard's Gift. The cool thing about Hildegard is that she was even able to "be" anything.  Most women in Hildegard's time didn't write music. In fact, most Medieval women didn't write at all! Most of them couldn't even read, and they rarely went to school. But not Hildegard. She learned to read and write in Latin, and she wrote music, drew pictures, came up with herbal remedies, and taught popes and princes. She did things no woman had ever done before, and she got away with it. She was not like anyone else who lived back then. Because she was daring enough to do those things, in time, other women were able to do them, too.

What was so special about Hildegard?

Hildegard believed her music and art was divinely inspired by God. Wherever your heart says your gift came from, never forget -- it is yours to treasure forever. Your heart is a secret garden, filled with hidden flowers waiting to blossom and bloom. It's YOUR gift to the world!

Hildegard’s Gift, was released in 2014 (Paraclete Press). You can purchase it here. Or here. 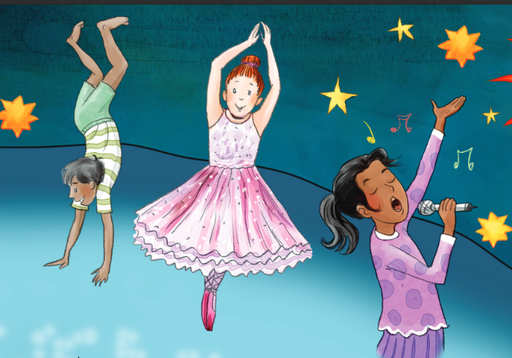