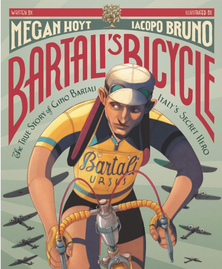 ​Booklist, Issue: February 15, 2021
Bartali's Bicycle: The True Story of Gino Bartali, Italy's Secret Hero
By Megan Hoyt Illus. by Iacopo Bruno
Feb. 2021. 40p. Harper/Quill Tree
​
This lushly illustrated picture-book biography tells of Tour de France champion Gino Bartali and his heroic efforts to save Jewish people in Italy during WWII. Bartali was a popular bicycling champion, known for his training rides around Florence and the surrounding countryside. When the Nazis invaded Italy in 1943, Bartali worked as a courier for the Resistance, delivering safe passage documents. He also sheltered a Jewish family, engineered an escape for 49 imprisoned British soldiers, and would whip up rowdy crowds of admirers to distract German soldiers during Resistance operations. The story-like text provides sufficient background to put these events into context and stresses that Bartali never talked about his contributions: though he remained a well known public figure (and won the Tour de France again in 1948), he remained silent about his wartime activities, which were only revealed after his death in 2000. This attractive and engaging account of a famous athlete, recognized as Righteous Among the Nations in 2013, and his quiet heroism is inspirational and adds a unique perspective to Holocaust literature.
Publishers Weekly

Hoyt relays the extraordinary actions of Gino Bartali, an Italian cyclist who won the 1938 Tour de France and went on to save around 800 Jewish people and 50 English soldiers during the Nazi occupation of Italy. Several of Bartoli’s pivotal efforts are illuminated, including his delivering fake identity packets to families across Italy and using his cycling fame to shield people as they boarded trains to freedom. Hoyt’s prose is atmospheric (“Gino pedaled up steep mountains dotted with alpine villages”), and Bruno’s bold, poster-style illustrations, rendered in pencil with digital color, prove thoroughly immersive. An engrossing look at a humble man whose efforts benefited many. Back matter includes a timeline, a note from Bartali’s granddaughter, an author’s note, and a bibliography. Ages 4–8. (Feb.)
Kirkus Reviews

The story of an Italian cyclist whose work with the Resistance in World War II earned him the designation of “Righteous Among Nations” from Yad Vashem, Israel’s Holocaust Remembrance Center.
Gino Bartali was a professional cyclist and had already won the prestigious Tour de France when World War II broke out. Dismayed by the rhetoric and aggression against Jews (and he counted many Jews as his close friends), Bartali made the decision to work for the Resistance, hiding fake identity papers in the hollow handlebars of his bicycle and, on his training rides, delivering them to families in danger. He also used his celebrity to create disturbances at train stations—distracting the soldiers so families being deported could board other trains—and even hid a close friend’s family in his basement. Afterward, Bartali never spoke about it, saying “Good is something you do, not something you talk about.” The text does a good job of relaying Bartali’s actions and his role-model courage, but the illustrations really set this picture book apart. Each one is an overall accomplished design in the mode of early cycling posters that brings readers’ eyes in, around, and to the page turn. The use of highlights and shadows to both delineate objects and to evoke mood and atmosphere is masterful. Bicycle details are accurate to the time period, as is Bartali’s cycling kit—a welcome attention to detail that enhances the story’s authenticity. A note from Bartali’s granddaughter appears in the backmatter.
A well-made story and a welcome, timely reminder of what true courage is. (timeline, author’s note, sources) (Picture book/biography. 6-10)
Publishers Weekly 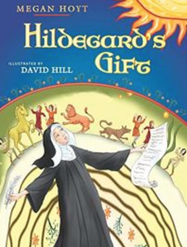 Hoyt offers young readers a glimpse into the life of Hildegard of Bingen in the newest in a series of picture books about saints. The text is enlivened by former portrait artist Hill's bright and whimsical illustrations depicting Hildegard's imaginative life. As a young child, Hildegard discovers her gifts—writing, painting and singing. She finds great joy in sharing her gifts with others, but suffers under the strain they bring. With tutelage from a nun, Jutta, and a monk, Volmar, she learns to read and write Latin and to produce plays. After a while, exhausted by the constant work, she becomes seriously ill. A visit from the monk Bernard of Clairvaux restores Hildegard's health. She then finds that her gift has grown even stronger and spends the rest of her life sharing her work with the world. Hoyt believes that every child has a gift, and her book serves as a prompt to talk with children about how to discover their own. Ages 4-8. (Apr.)