Megan Hoyt
Want to set up an author visit for your school, library, or bookstore?
It's easy! Contact me here for details, pricing, and further information. 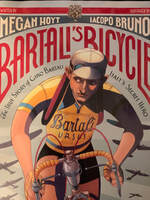 Gino Bartali pedaled across Italy for years, winning one cycling race after another, including the 1938 Tour de France. He became an international sports hero! But the next year, World War II began, and that changed everything. Soldiers marched into Italy. Tanks rolled down the cobbled streets of Florence. And powerful leaders declared that Jewish people should be arrested. To the entire world, Gino Bartali was merely a champion cyclist. But Gino’s greatest achievement was something he never told a soul—that he secretly worked with the Italian resistance to save hundreds of Jewish men, women, and children, and others, from certain death, using the one thing no authority would question: his bicycle.

For Bartali's Bicycle, I have a STEM program that will teach students about speed/time/distance. We can also discuss human rights, heroism, courage, and how to find the strength to do the right thing even when everyone else is not.

For Hildegard's Gift, I have a hands-on presentation for classroom visits. We will listen to Hildegard's original music, smell/taste/touch the herbs she used in her medicines, grind spelt into flour, take a look at some of her art, and read from her volumes. I have a few other surprises in store to enliven the visit for children. Shoot me an email HERE, and I will set up a time to come by.

From Publishers Weekly:
As a young child, Hildegard discovers her gifts—writing, painting and singing. She finds great joy in sharing her gifts with others, but suffers under the strain they bring. With tutelage from a nun, Jutta, and a monk, Volmar, she learns to read and write Latin and to produce plays. After a while, exhausted by the constant work, she becomes seriously ill. A visit from the monk Bernard of Clairvaux restores Hildegard's health. She then finds that her gift has grown even stronger and spends the rest of her life sharing her work with the world. Hoyt believes that every child has a gift, and her book serves as a prompt to talk with children about how to discover their own. ​